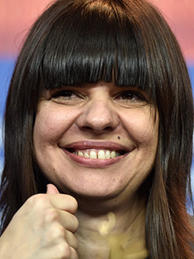 Amra Bakšić Čamo graduated from comparative literature 1996. Since 1995 she has been involved in new media and video production in the SEE region. She is one of the founders of SCCA/pro.ba, independent film, video and tv production from Sarajevo. She has produced and coproduced produced numerous awarded short films and art videos, documentaries and TV program and feature films. An Episode in

the Life of an Iron Picker by Danis Tanovic won Jury Grand Prix and Silver Bear for Best Actor at Berlinale 2013. For 11 years, she is head of the CineLink, regional co-production market and project development project of Sarajevo Film Festival. She is a member of ACE and EAVE networks and member EFA. Amra is working at the Academy of Preforming Arts in Sarajevo, Department Production as a lecturer.